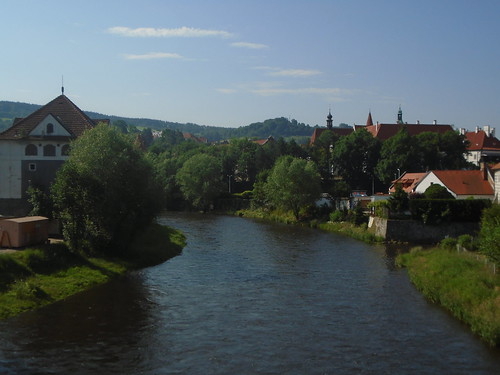 I spent about a week in Prague before striking out on my first Czech train ride, this one to Karlovy Vary in the western part of Bohemia. The Czech Republic comprises two ancient kingdoms – Bohemia in the west, and Moravia in the east. The term “Bohemia” (from the Germanic Boii people of Roman times) is much better recognized throughout the world than Moravia but both are known within the country as equally proud of their colorful and interesting heritages.

The picturesque and verdant hills and valleys of rural Bohemia are much written about. The American Willa Cather has left us three unforgettable novels (O Pioneers, The Song of the Lark, and My Antonia) about Bohemian immigrants trying to make their way in late-19th century Nebraska, and they are frequently described in her books as occasionally melancholic and nostalgic for the Old Country. For this reason I was eager to see the Bohemian countryside myself and maybe get a hint of what meant so much to them.

As the photos (only feebly) show, the hills of Bohemia are indeed a visual treat, dotted here and there with sleepy ponds, gently-flowing streams and bucolic scenes of family farming not so much different from a century ago. The 80-mile ride to Karlovy Vary had me leaning out of the window the entire way. For a few more photos of the Bohemian hills, click here.

One thought on “TRAIN RIDE: GREEN HILLS OF BOHEMIA”