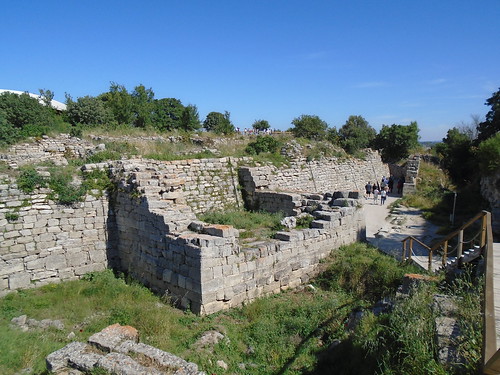 Visiting the ruins at Troy has been on my bucket-list for a long time. It’s only in recent decades that the Trojan War has gone from being just an ancient myth to something approaching a likely historical event with much relevant evidence being found at the present archeological site.

I had the good fortune, the day before I left Canakkale for the Troy site, to meet one of the PhD researchers on the new Turkish team scheduled to resume excavations in July. He spoke fluent English and in the process of hearing about their plans and expectations, I got so excited I asked him if the Director of the project might accept volunteers. He said “What do you know about archeology?” I said “Not much, but I love ancient history and I’m a quick learner. I’m also pretty good at translating Latin inscriptions on monuments.”

That last statement caught his attention and he said “You can do that?” I told him that when I’m in a museum I can’t resist trying to translate the inscriptions on stelae, pediments and burial markers and that I can usually translate around 50-60% of the text. We chatted some more and he wrote down the name and e-mail address of the Director and suggested I contact him. Then he added that he himself was about to lead an excavation in July and August at Assos, a Greek and Roman site about 20 miles south of Troy overlooking the Aegean. He handed me his card and said “You should join us. If you come, stop at the Director’s office and I’ll show you around.” I was thrilled! I immediately started re-thinking my trip to plan to be back in Assos in July. Here are some photos of the excavations at Troy: 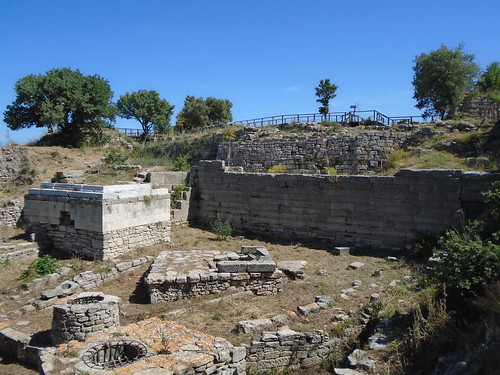 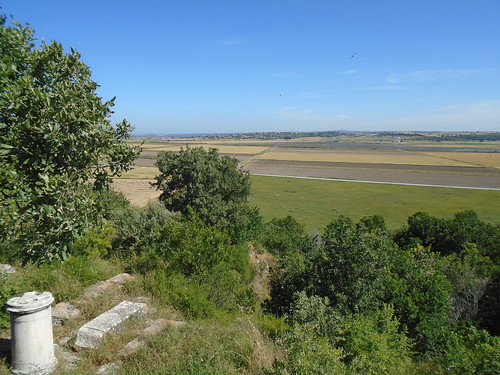 MORE PHOTOS of the ruins at Troy

NEXT STOP : ASSOS and the TEMPLE Of ATHENA 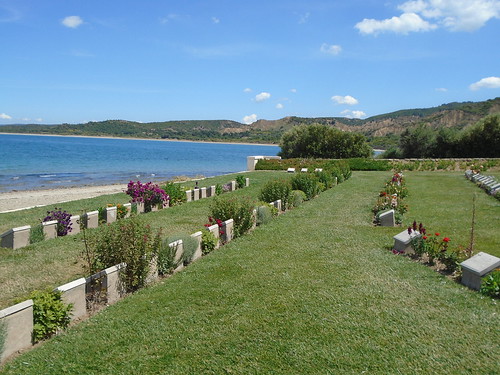 The Gallipoli Campaign was a brutal and bloody war of attrition in the early days of World War I which went on for eight months between British, French, Australian and New Zealand soldiers on the attacking side and the Turkish (Ottoman) defenders fighting to repel their invasion. It has come to be regarded as one of the worst military disasters in the history of the British Empire, mostly resulting from inept field command as well as poor intelligence, poor planning and, at least initally, a gross under-estimation of Turkish military prowess. Both sides suffered about a quarter-million casualties but Turks today regard it as one of the shining moments of their history, leading to the foundation of their new republic in 1923. It also produced a military hero who went on to almost single-handedly create the new Western-leaning Turkish nation, Mustafa Kemal Ataturk. Today, Ataturk’s presence is everywhere and unquestioning glorification of his achievements and significance seems to be a national obsession. 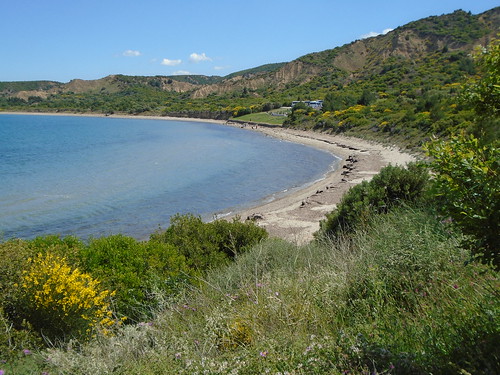 Australians, New Zealanders and even Turks commemorate “ANZAC Day” every year on April 25 to remember the heroism of their soldiers during the landing at ANZAC Cove, pictured above. You can see the memorial site in the distance. 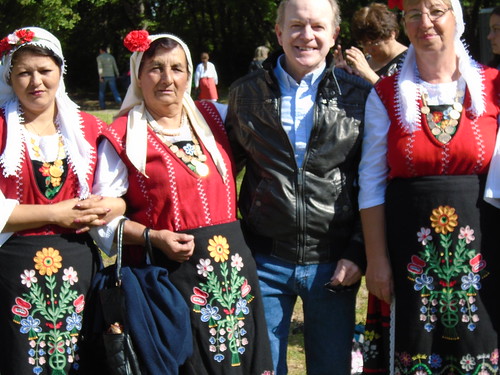 Just about 30 miles from the Bulgaria-Turkish border, I decided to stay in Haskovo for a few days and try to get my camera fixed. On the 4th day there, I rode from my hotel-in-the-woods, a converted country estate about four miles out of town, back in to see if Zultan was having any luck with it. The country road ran along the southern border of a sprawling, heavily-wooded national park and I happened to notice four colorfully-costumed women walking up a trail into the forest. Behind them were a few more. Curious, I turned back, parked the bike off the road, and followed the trail after them. About a hundred yards in, I came upon a large clearing, invisible from the road, and found something resembling a Renaissance Fair getting underway. Small groups of musicians were warming up here and there and clouds of pleasant smoke were rising from the vendors’ food carts. What a find!

I walked up to what appeared to be a judge’s tent of some kind with three people at a table holding clipboards. I asked if any of them spoke English and one, an attractive, cheery 40-something lady, volunteered to help me. I soon learned this was an annual competition of folk dancers and musicians from about 25 different villages in southern Bulgaria, some from up to 120 miles away. I ended up spending most of the day there, sampling the great food, music and folk-dancing. Lesson learned: When you see a trail disappear into the woods, always check it out. 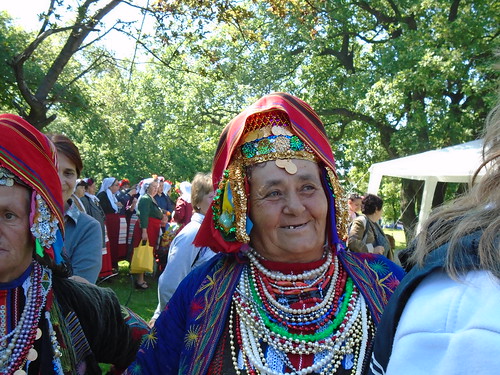 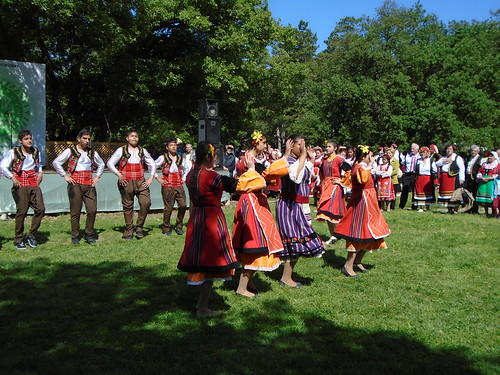 MORE PHOTOS of the Haskovo fair

At the dark end of Valentin’s Soviet-era garage, my travel plans were unraveling.

“Battery not good,” I said, trying to imitate his Soviet-era English.

“Fuel, smell fuel”, Valentin added as I got off the bike. Sure enough, gas was leaking prodigiously from at least two sources. “Two problems,” Valentin added, making sure I was keeping score correctly. I had that unpleasant sensation you get when something dreadful has just happened and you know from that very moment things were going to be different.

Valentin Snejanka is a big, stocky, friendly Bulgarian guy in his late 60s with a military-style haircut and fierce blue eyes. He looks like a communist-era military policeman, one of what the jingoist press used to call “Soviet henchmen”. We both stood staring at my scuffed-up Kawasaki 500 cc sport-bike as if some solution would materialize just from our staring at it. On the plus side, I remembered that the mechanic who had previously worked on the bike was only two miles away. I also remembered that the winding road to his shop was almost entirely downhill and that I could probably coast all the way there if I had to. On the other hand, I had to recognize that repairs may not be a practical solution and may be more expensive than was justified. It was, after all, a 15-year-old bike that I had bought in Ireland the previous year.

An interesting curiosity about solo motorcycle travel is the tendency during a long road trip to start thinking of your bike as an anthropomorphic being. I think it’s the simple reality of your dependence on each other for mutual survival. There have been many times, most memorably in the Himalayas, where if my bike had broken down, I would have been in some danger. You start thinking subconsciously about your bike as a partner, not just transportation.

Now I was looking at my ailing partner. She (for some reason motorcycles seem to be naturally “she”) had brought me from Cork, Ireland through a rough night crossing of the Irish Sea to Cherbourg, then through Italy, Slovenia, Croatia and most of the Balkan countries to Bulgaria. She had performed like a champ for three months and thousands of miles in rain, hail, and even snow in the mountains of southern Bosnia without once breaking down. As I looked at her reduced circumstances, I thought of the late afternoon thunderstorm and freezing rain as we went over the Fourneaux Pass from Grenoble into Italy. It had been a long continual climb and I had stopped near the pass when I noticed steam spraying out from the cooling system. I was afraid the radiator had cracked but discovered the steam was coming out of the pressure relief valve, a normal process when it’s close to overheating. She was working hard but she never quit. Now it might all be over.

I rolled the bike out of the garage and parked it in front of Valentin’s pension so the gas fumes wouldn’t drift up into the small hotel. It was Sunday and there was nothing to be done until the next day. I told Valentin I’d see him later and, wondering what I was going to do next, started walking down to the village square of Dragalevtsi, a decaying by-product of 200 years of government neglect. People were gathered here and there in small groups after Orthodox mass and the down-at-the-heels ambiance didn’t seem to dampen their spirits a bit. After all, the morning was blue and sunny, spring was afoot, and their motorcycles weren’t broken.

I sat on a bench in the quiet plaza, staring out at nothing in particular, mentally going through some possible contingencies in the event the bike couldn’t be saved. Since I was packed up to leave that very morning for a three-month ride through Turkey, Armenia and Azerbaijan, I had to take stock of my options. I heard the familiar groan of a fat, 1960′s Russian bus wheezing up the cobblestone roadway. That’s it, I thought, I’ll take a bus ride. I do some of my best thinking on slow-moving, frequently-stopping buses, especially when I have no idea where they’re going.

So I had to figure out a way to get the bike from my small hotel in the hills down to the bike shop nearly two miles downhill. I wanted to avoid the hassle (I don’t speak Bulgarian) and cost of finding a truck and driver to load it, so I decided to give gravity a try. I couldn’t recall any significant uphill stretches of road down to the shop, so I wheeled the bike out to the street, pulled my cap down tight, and just pointed it downhill. Away we went, down a steep cobblestone bank to the right, picking up speed, down through the plaza, across a crazy mishmash of an intersection, through a little neighborhood, then another. Still rolling. I couldn’t believe it, gravity was working! I was even picking up speed and was almost matching the traffic that passed me. Round a corner, across another intersection, past a schoolyard where a 10-year-old girl stopped playing ball to watch dumbfounded as the interloper rolled silently by. Now I was really moving and actually had to start braking occasionally. Then a long flat stretch where I thought I’d have to start pushing but the road dropped off and I was again picking up speed. One hard right turn and a bank to the left. With about 50 yards to go, I knew I was home free. The bike started to slow and came to a triumphal stop right at the driveway into the bike shop. I sat there grinning, wondering what I’d done to deserve such a lucky break.

Pacing the bike shop floor like an expectant father for the next two hours, I watched as Mitko carefully disassembled the carburetor, then cleaned and rebuilt it. He slowly put all the parts back together and I watched with some anticipation. Oh please start, oh please. Mitko hit the start button and a loud backfire shot out, startling some customers nearby. Then it jumped to life and unbelievably began roaring like new. Mitko throttled a few times and the engine responded with a new lease on life. My partner and I were back in business!